Kicking off a summer series  of hockey posts based on questions from people on Twitter and this one seemed like a good place to start.

Some of this response was originally posted here.

How has been being a Bruins fans in Toronto been? How do you think it's going to be?

By all rights, I should probably be a fan of the Toronto Maple Leafs or the Montreal Canadiens.

I was born in North York General hospital, located in a city of its own back then, but part of Toronto proper for the past 20 years or so.

We weren’t there long enough for blue and white to seep into my veins, though, and (mercifully) a move to a pre-Senators Eastern Ontario didn’t hook me into “le bleu blanc et rouge” or even the Nordiques and their GOAT logo, both of which played across the Ottawa River and a bit further east.

Cut to 2011, and I’m at the Sleeman Centre in Guelph, happily getting this grainy picture taken with Boston Bruins forward Rich Peverley while celebrating a Stanley Cup win, the first for the black and gold in my lifetime.

[record scratch] [freeze frame] Yup that’s me … You’re probably wondering how I ended up there.

To begin, I have this framed photo hanging in our family room of that explains a lot. It’s an image that you’re all probably familiar with, because, you know, it’s THE moment in Bruins history, and one of the most iconic images in all of sports.

What’s cool about this particular version of that shot is that it’s signed by the man himself: “To Ian, Best of Luck, Bobby Orr.”

My wife acquired it through a family friend, and it’s hung prominently with pictures of some of our travels and photos of our three boys. That picture was taken some 10 years before I was born, but in a lot of ways, that moment shaped my hockey loving life.

My Dad, like many GOOD ONTARIO BOYS AND GIRLS! at the time, was a big fan of Bobby Orr, and, by extension, a fan of the Bruins.

By the time I came around in late 1980 – over 2 years after Bobby scored his final NHL goal – a love for the Bruins was entrenched deep enough in my dad that it was passed swiftly down to me, just in time to get real steamed about a couple Final losses to the Oilers a decade later (made worse by the fact my older sister was a massive Mark Messier fan). 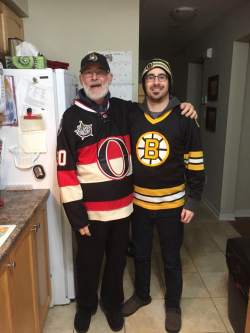 The thing with getting attached to something as a kid is that it often sticks, and, despite having never attended a game at the Garden (old or new), I’ve followed the Bruins for as long as I can remember, seeing them often in Ottawa and Buffalo.

My Bobby was Cam Neely, my 1970 was 2011, and even though my Dad has largely adopted the Senators as his primary club, I just can’t and won’t shake that pro hockey team from Massachusetts.

Which brings me to Court’s question.

Honestly, it hasn’t been too difficult being a Bruins fan living in Ontario for most of my life. Until recently, there haven’t been any playoff encounters to speak of, and we all know how things went down in 2013 and this past postseason.

In terms of how it’s going to be now that John Tavares has signed with the Maple Leafs, I’ll say this: I think it’s pretty neat that he signed with his hometown team.

I mean, come on – how can anyone outside of Long Island begrudge this?

Not everyday you can live a childhood dream pic.twitter.com/YUTKdfMALl

I wasn’t mad that Tavares didn’t choose the Bruins; in fact, I thought it spoke well of the team that they were of 1 of 6 invited to participate in face-to-face meetings.

It stinks that he’s in the same division, and it’s up in the air as to whether Boston will be improved or take a step back next season based on summer moves, meaning Toronto could very well have the upper hand in an extremely tough Atlantic.

At this stage of life, I find it hard to muster hate for any hockey team. The best part of my old job at theScore was getting to watch all 31 teams (yes, even the Kings) and coming to appreciate players and root for positive stories all around the league.

I’ll never be a fan of the Leafs per se, but I do like good, fast, skilled, high-scoring hockey, and I have to admit they’ve been and will continue to be damn fun to watch as long as the likes of Tavares, Auston Matthews, Mitch Marner and William Nylander are leading the way.

I also won’t attend the parade if a Kyle Dubas led team wins the Stanley Cup, but I’ll be happy for long-suffering friends and family members. And the state of the world being what it is in the summer of 2018 (read: poopy), it’s nice to see people celebrating and enjoying good things.

I just hope we Bruins supporters get to do it again before anyone else.

For those who aren’t on Twitter, if you have any hockey questions you want me to answer, fill out the contact form.